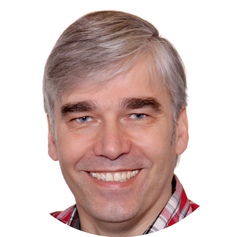 Taking place from May 26th to 29th with about 450 attendees and 18 speakers on the main stage, UIKonf is one of the main European iOS conferences. 2019 was the sixth iteration of the conference and the second time I attended after 2018. And while 2018 was a really good conference that I enjoyed very much, 2019 cranked it up to 11.

So what makes UIKonf such a good conference in general? First, everything encourages networking, getting to know new people in a very friendly environment. There are enough and long enough breaks between the talks to interact with other iOS developers. The space is not just one big hall but inside and outside, is structured enough to break it up a little while not encouraging the same groups to stay together the whole time. There are the social events on the day before, where attendees do activities in different groups that encourage getting to know the others in a very casual setting. There is a kick-off party in the James June Biergarten on the evening before the conference. There are the ambassador dinners on the first day of the conference, where you choose the kind of restaurant you would like to go to and someone who knows Berlin and the restaurant takes you there (again small groups). There is the party on the second day and the unconference with spontaneous talks and workshops.

And I didn’t even start to talk about the talks, which I described one by one here. Every single one of them was at least good and interesting, many of them were absolutely great. They covered a lot of ground from technical details, architectural thoughts, non-dev-work like marketing or managing up to the big questions regarding our responsibility, inclusivity or the kind of community we want to create.

Some recurring topics for me indicate the maturing of the environment. We think about accessibility (a11y) and inclusivity much more, moving from a focus on certain groups (defined by being able-bodied, their ethnicity, gender, age) to adressing all people. Different talks considered using Swift outside the Apple ecosystem. We think about enabling long-living codebases, being considerate about including third-party frameworks and structuring companies and communication between different groups. We are doing something because it is possible but get more considerate about whether something should really be done. We recognize that following the bias we have and limiting us to including only people like us will only go so far and that different people can bring so much more to the table (by the way: great workshop on unconscious bias by Inka Kretschmer on the last day).

Oh, did I mention that this year the organizers decided to go with a pure female speaker lineup? It was a great decision, the talks were all polished, relatable, relevant and generally on a very high level (even better than in 2018). Some talks were very funny, some were very technical and some gave a big picture and stimulated important thoughts about our roles and responsibilities.

It remains to be seen, if this approach will have a longer-lasting effect on other conferences and on the community in large. It should no longer be possible to excuse male-dominated conferences and publishings by the perceived missing number of capable women in mobile software development.

So to Sabine, Chrissy, Engin, Julia and Bianca: thank you so much for such a great job with the conference and providing all of us a great experience. I cannot begin to imagine the amount of work it takes to put it together. Thanks to the sponsors, to the speakers and most of all thanks to the many nice people I met (or met again) at UIKonf 2019. See you at UIKonf 2020!